A tragic night capping off a tragic week. Events are still unfolding, but many of have likely or will likely be reading about this morning’s events in Watertown/Boston. As of this writing, it’s 3:59AM.

I was getting ready to watch a movie with my wife until I saw [hashtag] #Watertown pop up on Twitter. For those that don’t use Twitter, a hashtag is a way of stringing Tweets together from different users based on that particular term. Click on #Watertown, and you’d see everyone on Twitter that put that term in their post.

Tweeters posting with #Watertown provided a chilling and real-time play-by-play of the events unfolding in the Boston area. Last word (of this writing) is that two suspects, linked to Monday’s marathon bombings, were involved in a firefight with police. One suspect is dead, the other is still at large.

The way in which today’s news broke will be another indicator of the power of social media. 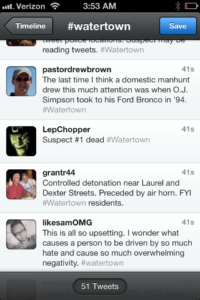 Social media is here to stay. The way we communicate has changed. Overarching all this is that innocent people lost their lives. It was an emotionally-exhausting, gripping night to keep up with. It was simultaneously historic, tragic, and indicative of the society we now live in. If you don’t have Twitter, get on it if for nothing else than staying in the news loop. Mine’s @mikekimtv. I’ll follow you. Most important:  may the police catch the remaining cowardly murderer.

How did you stay informed of the Watertown events? Is social media your primary source of news?