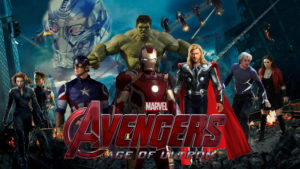 Over the weekend I got to indulge my nerd-self and see Marvel’s The Avengers: Age of Ultron. I know how seriously people can take this sort of stuff, so I promise — no spoilers!

As you can imagine, Marvel is a marketing machine. But if you take a closer look at the way they market their entire suite of movies, you’ll find some concepts you can apply to your own business. Let’s dive in.

1. They got “non-geeks” raving about these movies.

My wife is the polar opposite of me when it comes to comic fandom. Yet she was almost as excited about this movie as I was. One reason is because of the wide appeal of the actors.

Granted, no actor or actress will win an Oscar for their performance in a Marvel movie, but think about the kind of folks within their cast — Academy Award nominees and winners are all over the place, even in very minor roles: Gweneth Paltrow (Iron Man’s significant other), Anthony Hopkins (Thor’s Dad), Natalie Portman (Thor’s girlfriend), Scarlett Johansson, Jeremy Renner — the list goes on.

An expert in one field will retain their authority in another. Adding a few high-caliber, award-winning stars gives fringe viewers the impression that the script must have been good — at least in order for Hopkins to sign on!

Take a look at how you can leverage credibility from one field in your business to establish yourself in another, and use it to expand your customer base.

2. Every movie “drips” teasers about the next one.

Marvel has conditioned fans to expect a teaser at the ending credits of every one of their movies. This is vital because in today’s hyper-connected culture, it’s completely normal to already be thinking of Avengers 3 while watching Avengers 2. (I sure did.)

All this drip marketing creates continuity between their various franchises. For example, two of the characters in “Avengers: Age of Ultron,” Quicksilver and Scarlet Witch, “debuted” in a post-credits scene from “Captain America: The Winter Soldier” … two years ago! Find creative ways to drip upcoming products, services, or events.

Marvel will make miiiiilions at the box office, but they may make even more from Avengers affiliated merchandise: action figures, toy sets, board games, spinoffs on Netflix, network TV spinoffs, heck — the Avengers are even at Subway.

It’s not like they need the cash; the franchise is highly profitable as is. But Marvel refuses to leave any money on the table. This is a cross-generational franchise, and they’re firing on all cylinders to make sure they maximize profits in every sector, with every cross-sell.

Think about how you can create a suite of products around one idea, not just a one-time product. Some of these will be more expensive (up-sells), and some will lead to “lateral” sells (cross-sells).

Either way, don’t leave money on the table!

According to reports, Marvel will produce at least two more Avengers films, a two-part series called Infinity War. The first part releases May 2, 2018 (yes, 3 years from now), with the second part coming on May 3, 2019. Leading up to these films, the company will release “Captain America: Civil War” in 2016, “Guardians of the Galaxy 2” in 2017 and “Thor: Ragnarok” in 2017.

Talk about a full calendar. Well, people are talking because Marvel continues to announce dates well ahead of time.

This is one thing I see a lot of folks miss in their marketing — including live events. There’s no better way to get people talking about your next event or product than having them do it in the moment of experiencing your current one. Make your upcoming release dates or events public; you can always adjust them later. The important thing is to get word out in the moment.

5. Running full speed ahead of the competition.

Is all this marketing really necessary for Marvel? Actually, I think it is. The reason is that success breeds imitation. The more successful you become, the bigger the target on your back grows.

The more successful you become, the bigger the target on your back grows.

With the success of Marvel’s movies, competition has escalated quickly. DC Comics is attempting to launch their own universe-wide suite of movies, branching off 2013’s “Man of Steel” with the upcoming 2016 film “Batman v. Superman” which will apparently lead to their own ensemble film of superheroes.

It’s been said that the first law of marketing is to “be first” — whether to market or in the consumer’s mind. Marvel was “first” to market with the big-budget ensemble superhero flick, but staying first is another thing altogether. They are striving to stay ahead of the very competition they generated.

An interesting insight about competition:

Several months ago, I was at dinner with a businessman who owns the largest moving company in Connecticut. His success is obvious, but he said something that stuck with me.

He remarked, “My competition is anyone with a truck!”

Having just gone through a move myself, I can see what he meant. If I had a friend that had a decent sized pickup truck, I wouldn’t have rented a uHaul. For him, the competition wasn’t just other moving companies, it was any alternative method a prospective customer could utilize.

For Marvel, the competition isn’t limited to other superhero movies. Those fans (myself included) will probably watch every superhero movie that comes out anyways. We’re fans of the genre, not just Marvel.

But the competition for Marvel now is really themselves. They’ve established a successful franchise, but with each entry they need to up their game to keep their fans loyal. Strange as it sounds, this is the price of success.

See which of these concepts you can apply. Marvel is a huge enterprise, but you can see the core concepts of marketing are the same. Hopefully you’ll see some big time results!