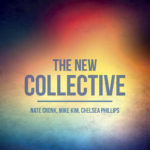 It’s here! The debut EP of the Northeast Worship Collective (New Collective for short) a community of worship leaders, songwriters, and musicians based in the Northeast USA is now available on iTunes, Amazon, and other major online music retailers. Featuring four original songs as well as a modernized version of He Is Yahweh, this EP’s top-notch writing, arrangements, and production is sure to be a resource to both listeners and churches alike. Many of these songs are already in use in the USA and around the world, including South Africa, Singapore, Brazil, as well as throughout the United States.