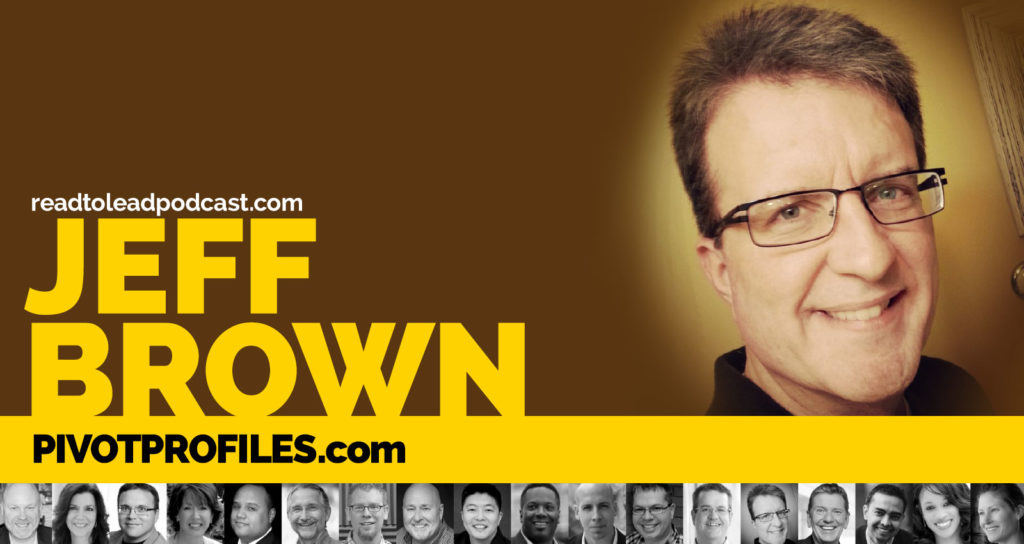 Jeff Brown is the creator of the award-winning Read to Lead Podcast, which features top business and personal development books and their authors. Jeff made his pivot in 2013.

What did you do prior to rockin’ the airwaves with one of the best podcasts on the planet?

I spent 26 years in radio from mid-1987 to mid-2013. On June 17, 2013, after fourteen years with my last company, I was let go. Fortunately, my wife and I discussed my leaving that company at the end of that same year. Being let go just meant moving that timeline up about six months.

You obviously had a pivot on your mind prior to what took place. What prompted that kind of thinking?

I went from thinking that working for someone else was the only option in life, to realizing that true freedom was in working for me. For a long time I viewed safety and security as benefits, a health plan, vacation days, and a paycheck every other Friday. That changed when I realized those things could be taken away from you easily and through no fault of your own. I decided to start taking control of that.

What was the most important thing that helped you weather the sudden changes?

It was working a side hustle in the margins of my life before having to depend on it. Around 2010, about three years before my forced pivot happened, I began developing mobile apps for small businesses. It was fun and great extra income. When I was let go, I jumped into that 100% and earned a pretty good living for the first six to eight months afterwards.

This was important. Within thirty days of being let go, I was able to invoice twice as much as my monthly salary from my previous job. It would be another few weeks or months before all that money came in, but that’s when I knew I was going to be okay.

I was surprised at how my network rallied around me. I think that happened because in the years leading up to my pivot, I did a good job of spreading other people’s messages. Launching my podcast happened to coincide with being let go; I was let go in June 2013 and my show launched in July 2013.

I knew long-term podcasting was going to be a part of my personal brand, and when I needed help spreading my message, it felt like people stood in line and were ready to do so. That was a pleasant surprise for me.

What would you say to someone looking to make their own pivot?

If you’re thinking about a career pivot, start in the margins of life and leverage those margins to build the thing you ultimately want to do. It doesn’t even necessarily have to be the thing that you intend to do long-term as in my case, just start before you have to depend on it.

People who take action are the exception, not the rule. We have to do more than just going about about our days, weeks, and months filling our heads with more knowledge. That’s not going to change the world. It’s not enough anymore just to have knowledge; you have to be willing to act upon it, to take ideas and put them into action.