Isn’t it astonishing that all these secrets have been hidden for so many years just so we could uncover them?

Nope, that’s not one of my quotes…

It came from Orville Wright over a hundred years ago when he and his brother Wilbur tried to become the first humans to fly.

I was inspired after visiting the Wright Brothers Memorial in Kitty Hawk, North Carolina. Maybe some of these will spark inspiration in you, too:

What made Kitty Hawk a perfect testing site was its harsh environment. The Wright Brothers wanted a place that offered strong steady winds, dunes, and empty treeless space.

“Isn’t it astonishing that all these secrets have been hidden for so many years just so we could uncover them?”

#2. How Much Practice Is Enough?

It’s hard to say when you’re learning something no one has ever done –– fly. In 1902 the brothers believe the key to success is practice. They make roughly 1,000 glides.

I didn’t understand how strenuous this was until I walked up the hill they flew from. There were no ski lifts or cars to transport the glider up –– they just carried it! If you’d like to see the actual hill, here’s a clip on my Instagram:

#3. Everyone Feels Like A Miserable Failure At Times. Everyone.

In late 1901, the brothers were discouraged by the glider’s poor performance and wonder if human flight is just a dream.

“When we looked at the time and money which we had expended, and considered the progress made and the distance yet to go, we considered our experiments a failure.” –– Wilbur in 1912, recalling how discouraged they were in their 1901 tests

Despite these setbacks, the Wright Brothers learn critically important lessons even from their disappointments.

(Anyone else learn from a setback or failure?)

Word about the brothers feat quickly reached the public but in a world weary of news about flying machines that turn out to be failures, there was little acclaim.

Early newspaper accounts, which exaggerated what happened, didn’t help. The “facts” sounded so preposterous that readers shrugged them off.

(I wonder who mocked the Wright Brothers as “wannabes” first. I suppose what people’s opinions don’t matter was much as we think they do.) 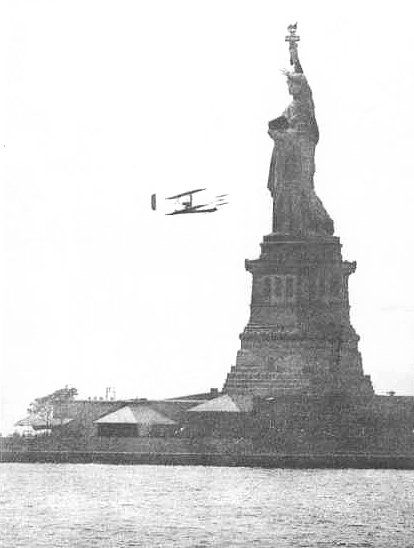 In September 1909, Wilbur did a public demonstration by flying around the Statue of Liberty in New York –– while strapping a canoe to his plane!

His figured if the engine failed, the canoe would keep him afloat.

(And I thought I took risks!)

My hope is that this piece inspires you to take bolder action. I had a few conversations with myself along the lines of, “You’re not going to do [hard task] when these guys carried a plane up a hill 1,000 times or flew around New York in a canoe?!?”
Check out these motivational lessons from the Wright Brothers.

Whatever it is that you’re looking to accomplish, the secrets to moving forward are out there somewhere just waiting to be uncovered. Remember Orville’s attitude:

“Isn’t it astonishing that all these secrets have been hidden for so many years just so we could uncover them?”

May this week be one of you uncovering more secrets.

P.S. – Not sure if this is for you, but my “Live Launch Lab” workshops help business owners uncover that secrets that guarantee their next (or first) product launch earns more money back.

I have 2 seats left for September and 1 spot left for December. If you plan to launch a product in Q4 of this year or Q1 of 2020 and want my guidance, strategy, and copywriting, click here for more info:

Not launching a product anytime soon?

Then it would mean a lot to me if you would share this Wright Brothers piece with someone via email or social media. Doing so helps get the word out and helps me add value to more people. Here’s the link:

Thanks for your time today –– I hope reading this piece was time well-spent!