Basketball was a big part of my youth. I remember during summer league one year, my coach had me guard the opposing point guard, which is often the smallest and fastest player who dribbles the ball the most. I was pretty tall and a good defender, but I was used to guarding bigger, slower players. 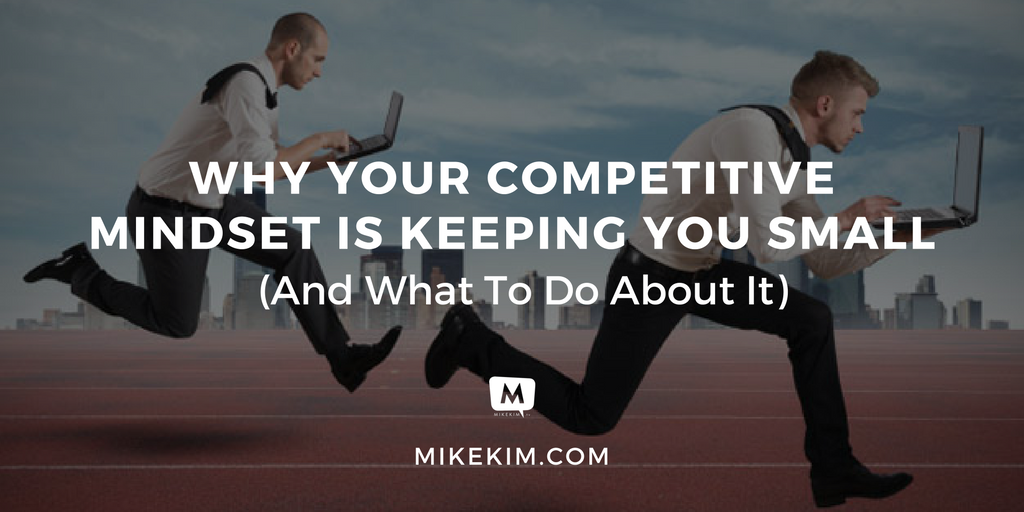 Chasing that freakin’ little guy with the ball was so annoying. Honestly, I’d sometimes foul him really hard on purpose just to get a breather, haha.

But my coach was trying to teach me something before the next season: to anticipate. He’d say stuff like, “Mike! Keep your eyes on his knees, anticipate, and get to a spot on the floor before he does!”

(That line about looking at the other dude’s legs was a bit weird for me, haha.)

So, it wasn’t really about being as fast as the point guard. I was bigger, had a longer reach, and could cover more ground moving laterally. As long as I didn’t let him make a B-line up and down the floor, I’d be ok. Technique was important, but it was mostly about being able to observe my competitor and anticipate his moves.

Observing and Anticipating the Competition Is Good, Right?

Years later, when it came to starting my own business, I kept my coach’s strategy top of mind. I paid a lot of attention to my “competitors” and let my products be in direct response to what they were currently selling. I aimed to always be a few steps ahead.

The result wasn’t what I anticipated. I actually spent too much time analyzing the market instead of entering the market.

If you’re in the personal brand business, competition is real — it’s just not as important as you think it is. Guarding that player for me was really annoying because my moves were predicated on his moves.

But here’s the thing: that made total sense because he had the ball.

When you’re in business, it’s different. The ball is in your hands, not your competitor’s. Those who have truly risen to the top aren’t feeding their energy into their so-called “competition”. Instead, they’ve used that energy to embrace their unique skills and potential. Which brings us to my next point…

It’s all been done before … just not by you!

There are thousands of coaches and consultants out there. There are hundreds of podcasts popping up every single day. I could feel threatened and spend my energy looking at the competition.

But I’ve learned that no one can deliver a message based on my truth, filtered by my own experiences and packaged in a way that only I know how. The only real competition in this line of work is the guy I see in the mirror. The more I invest in that person in the mirror, the more the business grows.

We’re each inherently unique, which means that the ways we express our ideas are also unique. Inevitably, our uniqueness will resonate with different individuals and attract an audience that is uniquely ours. Embrace this truth: Good marketing attracts, great marketing repels.

Collaboration Begins Where Competition Leaves Off.

It’s time to play bigger. There are people out there holding the keys to doors you need to walk through, but you’ll never meet them if you don’t collaborate. I’m not telling you to forgo your personal brand. I’m saying team up with those who can help amplify your message and reach.

One of my early collaborations was in the form of an affiliate product launch. It was for a online training course that I had personally benefited from, and I knew it would greatly serve my audience. I got a commission for any sales that came from people I introduced to the product.

The results spoke for themselves. Over the course of the launch, I was able to:

The bottom line is that the benefits far outweighed any possibility of “losing out to the competition”. In fact, it proved the exact opposite.

I’ve taken this a step further by partnering with two of my close friends to launch a full-fledged marketing agency. There’s a tremendous synergy there because together, we’re greater than the sum of our parts.

I encourage you to think about you can align yourself with. Who can you shine a spotlight on? Who can you recommend to your audience? That generosity will go a long way — and while we tend to dislike when superstars collude to get on one team, you can’t deny that it’s good for business. It will be the same for you.

Question: How have you embraced collaboration over competition? Share your experiences in the comments below or join the conversation in my FREE Facebook community.