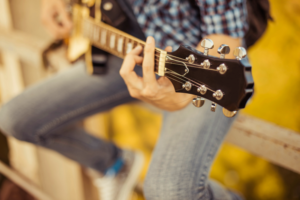 Too often, young Christian guys/gals dabble in both instead of fully realizing their potential in one or the other. A few years pass and the young guy/gal is now a regular guy/gal…with bills. The problem is underdeveloped skills in both music and ministry.

By music standards they lack skills that could earn them a living as a musician. By ministry standards, they lack other skills (speaking, leadership, interpersonal, etc.) that would warrant a church paying them a salary. Then they’re wondering why things didn’t work out for them.

Years ago I wondered:  “If I couldn’t lead worship, would I still be in ministry?” Answering “yes” helped me realize worship leading was just part of my assignment. Ministry involves transitions. I’ve been through several, so have many friends who were worship leaders and are now ____, or used to primarily lead worship and now primarily ____. Successful transitions require intentional thought and actions. This is no different.

Musicians and Artists live and breathe Music and Art. How about you? Are you willing to live hand-to-mouth, sleep in your car, and play anywhere ’til you hit it big? My heart in this post is for those in the tension between music, ministry, and making a living. I know you don’t need to be:

You just want to be:

I know it looks so easy when you see Famous Worship Leader in front of thousands, but think about it. Most of the people doing that are there because of ministry. Hillsong is a church. Jesus Culture was a youth conference. Chris Tomlin exploded via a college student ministry, Passion. Matt Redman was the worship leader at Soul Survivor.

People with a platform often have one because they served in a ministry when there was no platform to begin with. They grew with their ministry or church.

If you want to be a “worship artist” you might lean a bit more towards the ministry side than you think. Learn more about how worship ministry works. Don’t bite the hand that feeds you, especially since no one is paying a cover charge to hear you.

Oh, keep leading worship and writing because that may just open doors for you to do other things later. Just don’t wait ’til later to consider or learn how to do those other things.