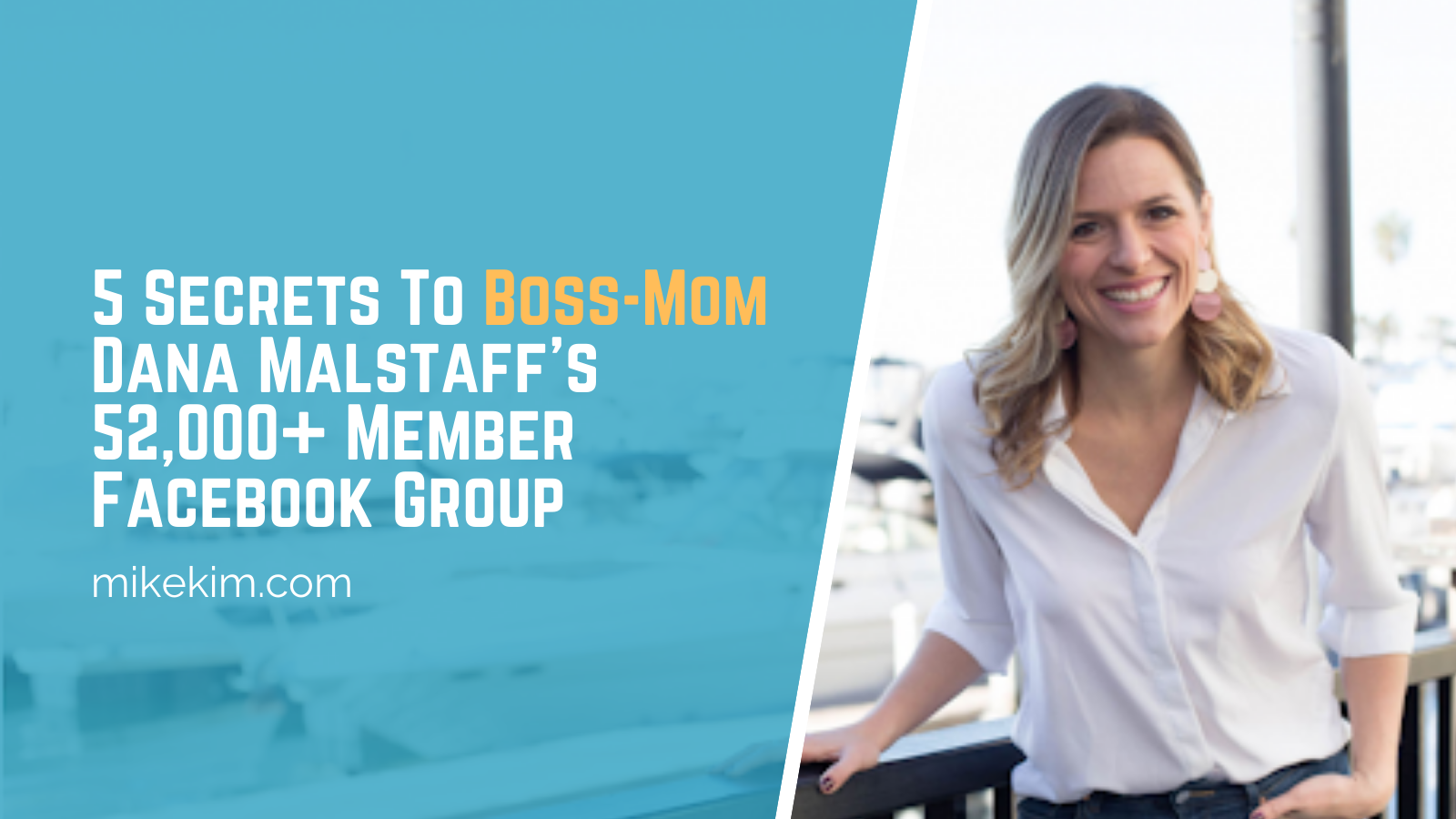 One of the most powerful tools in marketing today is Facebook Groups. Admittedly, I’ve struggled with using them in my business. At best, I’ve used Facebook Groups merely as a makeshift online forum for people who join my courses or coaching programs.

I’ve seen many of my colleagues grow thriving groups, both in sheer numbers and engagement –– but I’ve never understood how until my friend Dana Malstaff gave me some killer inside advice while we were both speaking at a conference.

Dana is the author of the best-selling Boss Mom: The Ultimate Guide To Raising A Business and Nurturing Your Family Like A Pro, the founder of Boss-Mom.com, and runs the Boss-Mom Facebook group (52,000 members and counting).

Dana’s advice, at least for me, was very counterintuitive and eye-opening.

(Later on, I interviewed Dana on my podcast for a deeper dive into the topic, which you can listen to in the player below.)

If you aren’t clear on what you care about or what type of people you want in your group, Dana recommends against starting a Facebook Group.

Without a clear vision, things get messy and confusing –– and no one likes mess and confusion.

People like to go where there is clarity, when they are sure they know what they’re going to get, and –– in a business sense –– where there is good customer service.

You can’t plan on pleasing everybody, so dial down on the type of people you actually want in your group. Set boundaries to make sure that your ideal audience is the only type of people that it attracts.

When that happens, Facebook will often end up doing your marketing for you. Dana credits a big part of her group’s growth to the Facebook algorithm recommending her group to people similar to the folks inside.

If you are the type of person who starts a Facebook group with the intent to “train” your members, Dana says it is going to be an uphill battle.

This is exactly the opposite to how I’ve run my groups in the past and why they were such a source of frustration for me. Since I run several paid courses and coaching programs already, I always felt it was redundant to do the same thing in a Facebook Group.

“Training is not the answer to everything, man. People need community. They need each other.”

Being a guy with no kids who teaches and consults for a living, you can imagine why I never saw things this way!

That said, facilitation does not mean you should be at the center of the group. So how do you shut off “teacher mode” and turn on “facilitator mode”?

It’s as easy as stepping back and letting your group members do all the talking. You are simply the beacon that guides ships to port. You’re not the port or the ship –– just the beacon. The less work you have to do to make the group work, the better.

Part of improving facilitation starts with understanding that there are different kinds of personalities in any group. For example, there are bound to be people who are natural connectors. These are the folks who tag others in the comments section of a post. By doing so, they do a lot of your “advertising” for you.

You will also have your fair share of emotional connectors. These are motivational folks who often show lots of care for others and, in a sense, let others cry on their shoulder. They go out of their way to help others in the group.

Because I’ve always been more of a “faces, not crowds” type person (I like to go deeper working with a few people than going wide and shallow) certain mediums like Facebook Groups can feel too big for me.

Dana helped me see different avatars in my group, and this helped me realize that if I see the folks in a group through that lens, I could use Groups without sacrificing my preference to work with few rather than many.

4. Use Clear and Intentional Prompts & Posts

By this point, my mind was spinning from shifting my perspective towards groups. Then, I just flatly asked Dana, “Yea this sounds great, but what do I post in the group??”

There are typical posts people use like Motivation Mondays or Tuesday Tips, but it’s really about what kind of prompts work best in your group. An example of one of Dana’s publishing schedules is as follows:

The key is to be consistent in small doses. Members will mark their calendars and learn when to jump into the group if they know there will be a follow prompt posted that day.

Rather than always posting the same exact prompt each week, switch it up. Ask people to share their Instagram handle one time, a blog post another time, and their Facebook page another time after that. That way there’s still some variety without confusing your people.

5. Make Sure Your Last Five Posts Set A Clear Tone

When people first join your group, they don’t see your brand as a whole. Rather, they make snap judgments based on the most recent posts they see which is why consistency is so important. They get “indoctrinated” by those first 5 posts that they see. If those 5 posts don’t reflect your brand or culture, people won’t understand your group and they won’t engage. 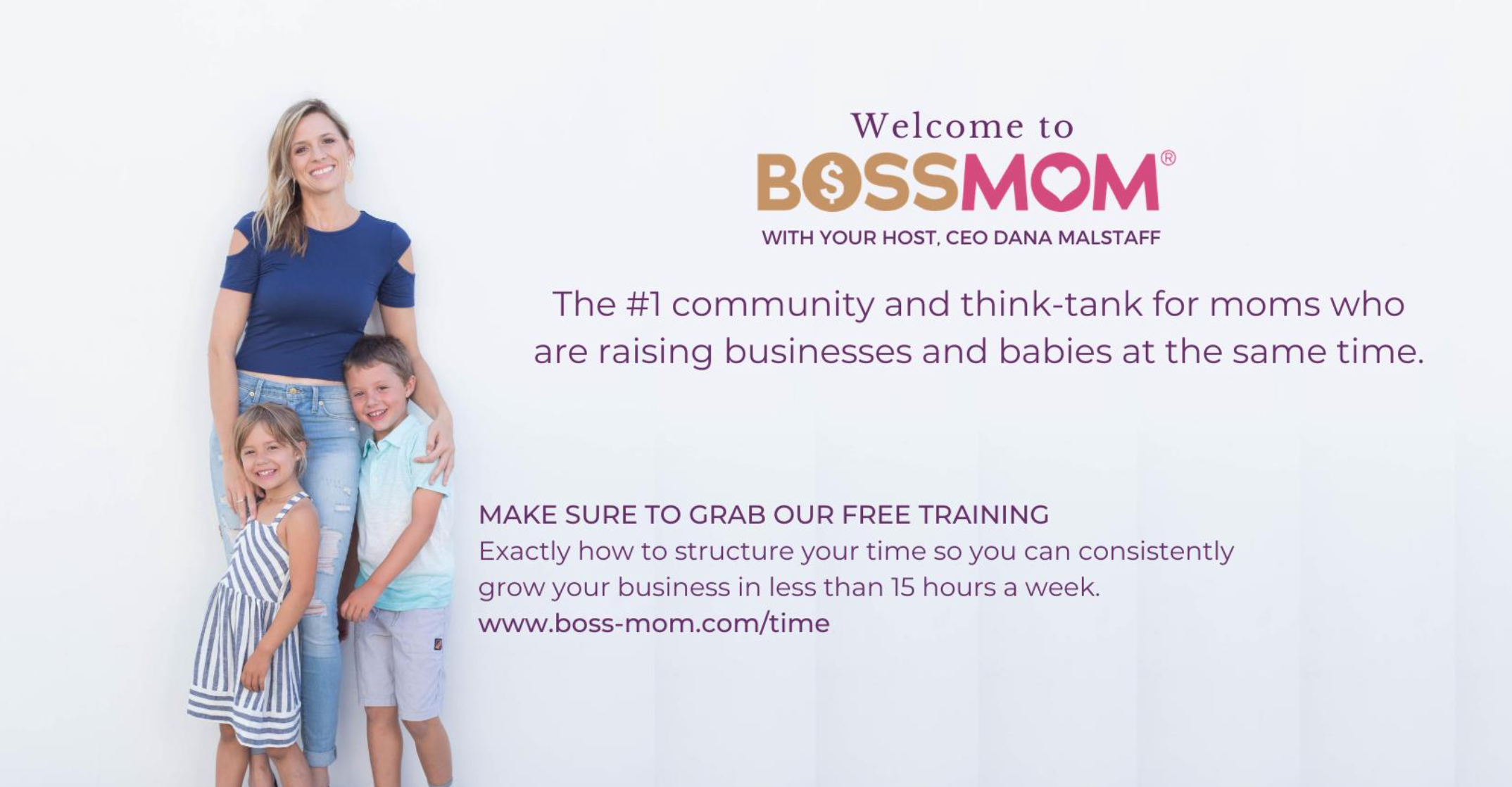 On the other hand, if they see congruency in the way members are asking questions, the types of comments that others are leaving, or the amount of engagement that is happening then it becomes easy for them to understand and engage in the group.

A way to help decide on the types of conversations you want to have happen in your group is to first visualize a city and all of the places you can go. Conversations in a coffee shop or salon are very different from the ones that take place in a lawyer’s office or hospital –– yet these locations are all in the same city.

You need to decide what type of conversations you want to have in your group. What type of business do you have in the city? Where are the people who are coming to you coming from? What are they expecting and what is their worldview?

Now that we’ve covered a few of these tips, let’s tackle some other common questions people have about Facebook Groups.

1. What is the best way to start a Facebook Group?

Before starting your own group, Dana suggests becoming micro-famous in someone else´s group first. This is a way for you to become well-known in your niche where you can make a reputable name for yourself –– just from being active in another group. Then you can invite people to join you in your own group so you can have all of those people who expressed interest follow you.

Dana’s response: No. Your Facebook group should grow your email list, not exist in lieu of it. When people ask to join your group, prompt them to insert their email in order to enter the group (Facebook allows you to create a set of questions before people gain acceptance to your group).

Between 40%-60% of new members will provide their email. Make sure when the response comes in to copy it over to a list because once they’re approved, their response disappears.

3. Can you promote a launch in your Facebook group?

Yes, but there needs to be a warm-up period. Prep your audience for four-to-six weeks before your promotion and let them know something big is coming. Dana recommends a book called The Creative Curve by Allen Gannett. Gannett talks about “the familiar” versus “the new” and how to build up familiarity so your audience isn’t afraid to take action when something new comes along.

Dana has taken a platform that everyone has access to and figured out how to make it work for her. I’m always fascinated by how other people build their platforms because there is always something we can learn from one another.

Question: What was your biggest takeaway from Dana Malstaff’s approach to Facebook Groups? Share in the comments below.