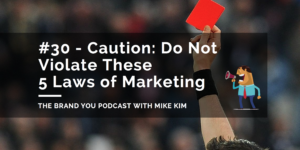 Marketing your personal brand is tough enough as it is — but it’s even harder if you go against the current. These 5 “laws” of marketing will help you get more traction and results. Violate at your own risk!

1. The Law of Leadership: It’s better to be first than better.

2. The Law of the Category: If you can’t be first, setup a new category you can be first in.

When Heineken became a big success, Anheuser Busch could have said, “We should bring in an imported beer, too.” If you can’t be first in a category, setup a new one you can be first in and promote it. Don’t ask yourself “how is this better than the competition” but rather “what are we first in?”

3. The Law of the Mind: It’s better to be first in the mind that to be first to the market.

Apple’s problem in getting into its prospects’ minds was helped by its simple, easy-to-remember name. On the other hand, Apple’s competitors had complicated names that were difficult to remember. In the early days, five personal computers were in position on the launching pad: Apple II, Commodore Pet, IMSAI 8080, MITS Altair 8800, and Radio Shack TRS-80. Ask yourself, which name is the simplest and easiest to remember?

Think about the 3 biggest Japanese cars: Honda, Toyota, and Nissan. Now this reflects the mind in a very interesting way. You would think that the sales of these three brands would be the same in Japan as in the US. Toyota sells 4 times as many autos in Japan as Honda does.

In Japan, Honda is a motorcycle company. It’s the same as if you heard Harley Davidson was now making cars.

5. The Law of Focus: The most powerful concept in marketing is owning a word in the prospect’s mind.

If you can own a word, you’ve become almost irreplaceable. This is where you’re getting really targeted and gaining major, major traction in your branding.

Two books you should check out:

Would you review this show? I would consider it a great honor if you would leave a written review on iTunes. It’s one of the best way for word to get out about this podcast. I read every single comment … leave any review you want, as long as it’s honest. Thank you!