Matt, what’s the story behind your career change?

Before I made my pivot I was a web marketing manager at Shure, a large pro audio manufacturer. I ran their websites and web team, and was also involved with social media, marketing campaigns, and customer engagement.

After ten years with Shure, I went to work one Tuesday. I bike commuted as I normally did. At 10:30am that very morning, I was given a severance package and basically being shown the door. I had to call a cab because I had to clear my desk and couldn’t carry the boxes on a bike.

I remember it was like the prettiest day of the year. The sun was shining off the building. It was only 10:30 in the morning; the next thing you know I’m back at home and going, “Now what? What am I going to do?”

Wow, that is just brutal.

Yeah, when you get let go, you have to tell people in your life and everyone responds like someone died, especially if you’ve been at a place for ten years. My old co-workers would call me with hushed voices saying, “I heard about what happened.” Everyone was sad. It was a hard thing leaving and saying goodbye. I didn’t have the closure I wanted. I didn’t go out the way I wanted.

Was there anything you did to get your bearings after this?

I went to visit an entrepreneur friend of mine. He asked me a question with a solemn tone:  “Did they give you a severance package?” I said yes. He goes, “Was it a good one? How long can you live on it?” I said, “Like 4 to 6 months.”

Then he got this big smile and said, “So, they’re funding your startup!”

That was such a big shift for me; this idea that I wasn’t let go and rejected, but was actually given an incredible opportunity and a runway for a pivot.

Even though I still struggled with some of the feelings of rejection and self-doubt, I kept reminding myself, “They’re funding your startup!” 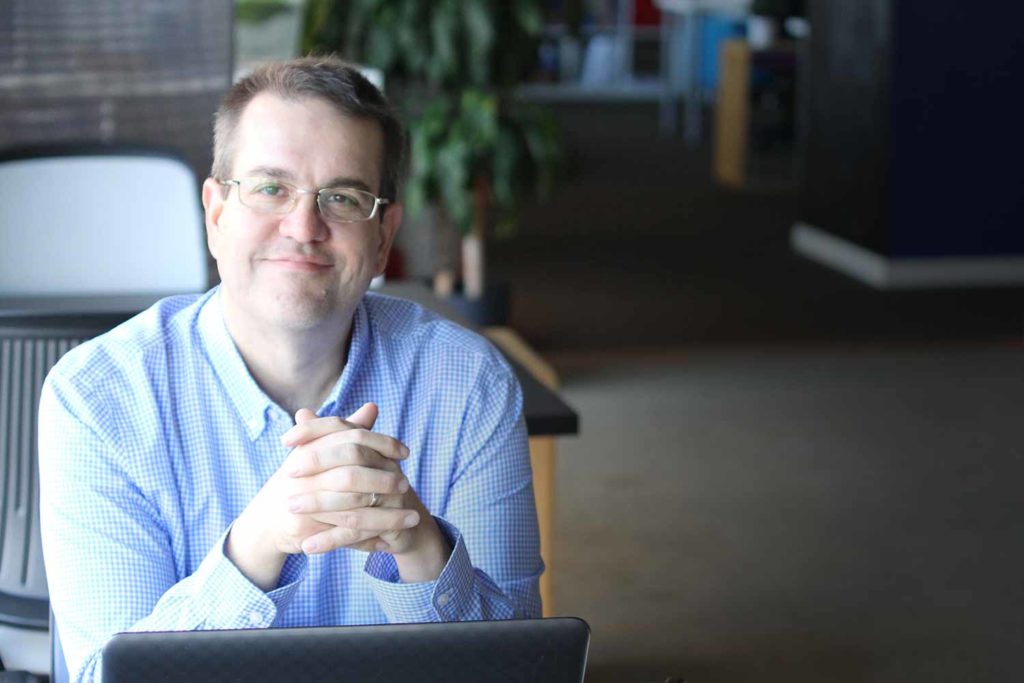 Looking back, what’s one thing that positioned you to make a successful pivot?

I also invested in an automated marketing class for internet entrepreneurs. I took those two classes while still working my corporate job. I had already shifted a little bit and started building some things outside of my company.

For most of the people I worked with at Shure, their sole focus was the company. That’s where they networked, that’s where their friends were, that’s where they put all their energy. Investing in myself and building things that weren’t connected to the company were vital. When I got let go, I realized how final it was. I didn’t have those relationships, that network, or my position anymore.

Looking back, I’m very happy I invested in my podcast and in creating other relationships. I reached out to entrepreneurs online and started a very small network of people that I could reach out to, people I would’ve never known if I just stayed in my corporate bubble.

Honestly, the biggest surprise was when people started paying me. I remember the first time I opened PayPal and had a coaching client pay in full. I was blown way that someone took a risk on a new coach and someone who they didn’t know from a different city.

Now, I was happy to be paid for coaching but I was charging a pretty low rate; I undervalued myself to my first couple of clients. I remember getting on a call with a potential new client on a Monday morning. I wrote a number on a piece of paper of what I thought I was worth. When I got to the point where I told him what my fee was, I read the number and without hesitation he said, “Let’s do it.” I realized that all the fear I had about raising my rate and being rejected was just in my head.

I realized, “I can do this. I can be paid what I’m worth, and I can also confidently ask people to pay me for the services that I’m giving them.”

Now that you’re on the other side of your pivot, what would you have missed out on had you not gone through all this?

Outside of my consulting clients, I would have missed out on serving my podcast’s audience. They would suffer in silence. It’s difficult to have an addiction, especially one that is taboo to talk about and is a little embarrassing.

I’ve really been experiencing an outpouring of gratitude about how the things I’m doing and investing in are truly allowing them to make big changes in their lives.

One client mentioned seeing my pivot and how he saw it as an opportunity for me to invest more in this community. He was really thankful that I got let go from my old job so that I could spend more time on this. That was funny.

What would you say to someone looking to make their own pivot?

Like I mentioned earlier, I took a podcast course two years ago, in 2014. I took a course on automated marketing. I learned how to build an autoresponder list and build a list of listeners.

I started networking with people; I remember that’s one of the ways that I connected with you (Mike) after writing an e-mail about podcasting. Then we started connecting, and then I had an opportunity to get involved in a course with you.

I just kept the relationship and started reaching out to others that had nothing to do with my corporation or with the industry I was in. Try things on the side that lead you to where you want to go.