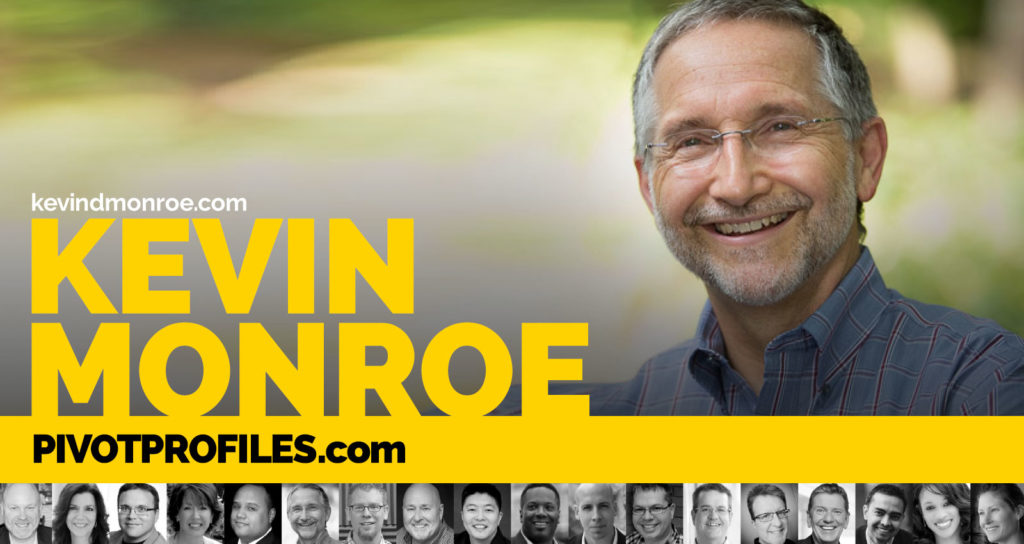 Kevin Monroe is an executive coach that specializes in helping high achievers connect with their higher purpose.

Prior to this, Kevin was a consultant focused on leadership and organizational development, and spent several years training non-profit organization. He is a self-proclaimed “serial pivoter.”

Kevin, you’ve been through several pivots. What was your journey like?

I’m a serial pivoter. My education prepared me for a career in vocational ministry. After a head-on collision with church politics, I decided enough was enough and made my first major pivot.

Fortunately, my father taught me that people skills are transferable and that if I had anything that could be classified as a skill, it was “people skills.” That pivot landed me in a sales career in the early days of the wireless business. I spent a dozen years in that industry, ten of those with a company now part of AT&T.

While working in the corporate world, I volunteered with a non-profit organization that served the homeless. This was a catalyst into jumping into non-profit work, which I did for three years.

All this time, I had a longing to launch out and do my own thing. In 2005, I pivoted again and launched a consulting business. Let me assure you, launching your own business doesn’t mean there are no more pivots. I’ve had three in the past eleven years, all while owning my own business.

One of these involved a shift from working primarily with non-profits to leadership development with for-profit corporations, including Fortune 100 companies that are household names.

Finally, in mid-2015, I was on the precipice of yet another pivot. This pivot really tied everything in my life together and kicked it up several notches into coaching and writing on “higher purpose.”

You had a very successful career running your own consulting business. Why make a change?

I had an authenticity crisis. Authenticity has always been important to me. In May of 2015, early one morning, I had an awakening. That awakening was the realization that to be truly authentic, I had to own that I am a Christ-follower. That doesn’t mean putting a cross on my logo, but I felt I had somehow quieted my faith.

As a result, I actually stepped away from a newly formed joint venture and launched back into a solo entrepreneurial venture. Through several months of soul searching and conversations with close friends and confidants, I discovered the path forward.

Having been through so many pivots, what has been the biggest surprise, good or bad?

I was surprised at how hard it was for me to see, accept, and believe truth about my abilities and capabilities that were readily apparent to others.

I ran into a guy I had met only a couple of times; about four years had passed since our last meeting. Imagine my surprise when he told me I helped him find the clarity and courage to pursue a higher purpose. After our conversation ended, I realized this isn’t something new for me. I’ve been doing this for years, it simply wasn’t a focus and I wasn’t aware that I was doing it.