Last Friday, my father-in-law and I attended one of golf’s most prestigious tournaments, the U.S. Open. Dad is visiting from Korea and an avid golfer. The tournament was only a 90-minute drive from my house so we voluntarily got ripped off on Stubhub and went.

This was our first live golf event. We were excited about seeing the world’s best golfers, but were also excited to experience the U.S. Open. Since golf doesn’t have assigned seats or a specific arena of play (the holes are all spread out), walking the grounds immerses you in the event. Some takeaways:

It’s been said that culture is hard to define but very loud; that a person can feel the culture of an event, place, or organization almost immediately.

There is a very distinct culture about golf. Granted golf has been played for centuries and is a more stately and refined sport than say, beer and bowling. Still, I was amazed at how reverence for the game permeated the entire event. Some examples:

Culture is comprised of tangibles and intangibles. These small tangibles helped create an intangible yet powerful feeling. Had those scoreboards been huge HD screens, they would have been invasive to the un-commercialized nature of the event. That leads me to:

I never realized this more than at the the U.S. Open. Though viewed by millions on TV, you never would have known it while there. Cameras were camouflaged in unmarked towers and photographers used long lenses to snipe pics from far away. The absence of VIP boxes meant there was no distinction among spectators. I stood right next to Olympian Michael Phelps on the fairway of hole 14. He was just another fan.

Seeing some of the world’s most famous people in an environment strictly limiting cameras and reporters humanized these stars. Contrast this to the media coverage they get, you’d think these guys were 15 feet tall.

Media has a way of making people seem invincible. Tiger Woods walked just a few feet in front of us and I wondered how wild it must be to have your indiscretions and divorce play out on the world’s stage. Do stars and leaders need sympathy? Maybe, maybe not. But they’re human, which was a reminder to me to keep people I admire within the human race. Some advice given to me as a younger leader still holds true today:  never believe your own press clippings.

3. Irrelevance is a cruel state to live in.

This was more a marketing takeaway and a bit contrary to my last point, but irrelevance really stinks. I felt bad for the no-name golfers. On one hole there were eight people watching a group tee off. On Tiger’s holes, there were like 800…or at least it felt that way. I know they are there to compete and not draw fans, but still.

If your market is a crowded field with some established names, irrelevance is probably the worst fate you can suffer. In golf, it’s clear what is required to stand out from the pack:  winning. In business or organizational life, the requirements to stand out from the crowd aren’t always clear.

A few of the no-name golfers dressed very loud; one guy was in bright orange head-to-toe but I don’t remember his name or his game. If he played well enough to warrant media coverage while wearing that outfit…and won? He’d be on his way to becoming a household name.

Irrelevance is something that every leader and organization has to maintain a constant fight against. Do you stand out from the crowd or are you a wandering generality? 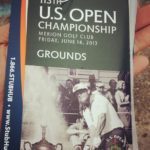